The Daphar Plantation is Reserved Forest having an area of 7135 acres. It is situated at the intersection of latitude 32°- 26’ north and longitude 73° - '11’ east in the Malikwal Tehsil of Mandi Bahauddin District, about 9.6 KM to the South of Pakhowal Railway Station. It is being irrigated from Bhalwal distributaries with a sanctioned discharge of 86 cusec. The Sub Divisional headquarter lies at a distance of 112 K.M. from Gujrat via Phalia and 80 KM from Sargodha via Bhalwal. The ground generally slopes down from east to west. The soil of Daphar Plantation is in general the gift of river action. It is on the whole alluvium with varying proportions of clay and sand. Technically speaking the area falls within the true-arid division of the semi-arid climatic zone. The hottest months of the year are May and June (i.e 41.1C°) while January is the coldest one. The rainfall is very erratic and most of its is received during the months of July and August (i.e. 262.1 & 224.6) The area was a typical dry tropical forest known as ‘Rakh’ before it was felled from 1882 to 1901. The original vegetation consisted mainly of Van (Salvadora oleoides Done), Jand (Prosopis cineraria  Linn.), Karir (Capparis decidua Pax.), Mallah (Zizyphus nummularia W&A.), Ber (Zizyphus mauritiana Lamk.), Chamror (Ehretia laevis Roxb.), Rehru (Acacia leucophloea Willd.), Lahura (Tecoma undulata (Smith Seem.), Frash (Tamarix aphylla Karst.), Kangu (Lycium europaeum Linn.), etc. etc. These species occurred in groves and patches with sufficient space in between. The general height of the trees varied from 15 feet to 30 feet (4.5m to 9m). There were mounds and depressions. The mounds were covered with xerophytic species while Dhak (Butea monosperma, Lamk. Taub.), Lasura (Cordia dichotoma), Jangli-anar (Punica granatum Linn.), Phagwara (Ficus palmata Forsk.), etc. etc. were found in depressions. A few trees of kikar and shisham could also be found on relatively favourable sites.Presently Shisham and Mulberry are the principal species growing in mixture over a major portion of the plantation area. Other species growing are Eucalyptus, hybrid-poplar, semal, bakain and kiker. Bamboo are also grown on experimental basis. Every years about 300 acres are being afforestated / regenerated. 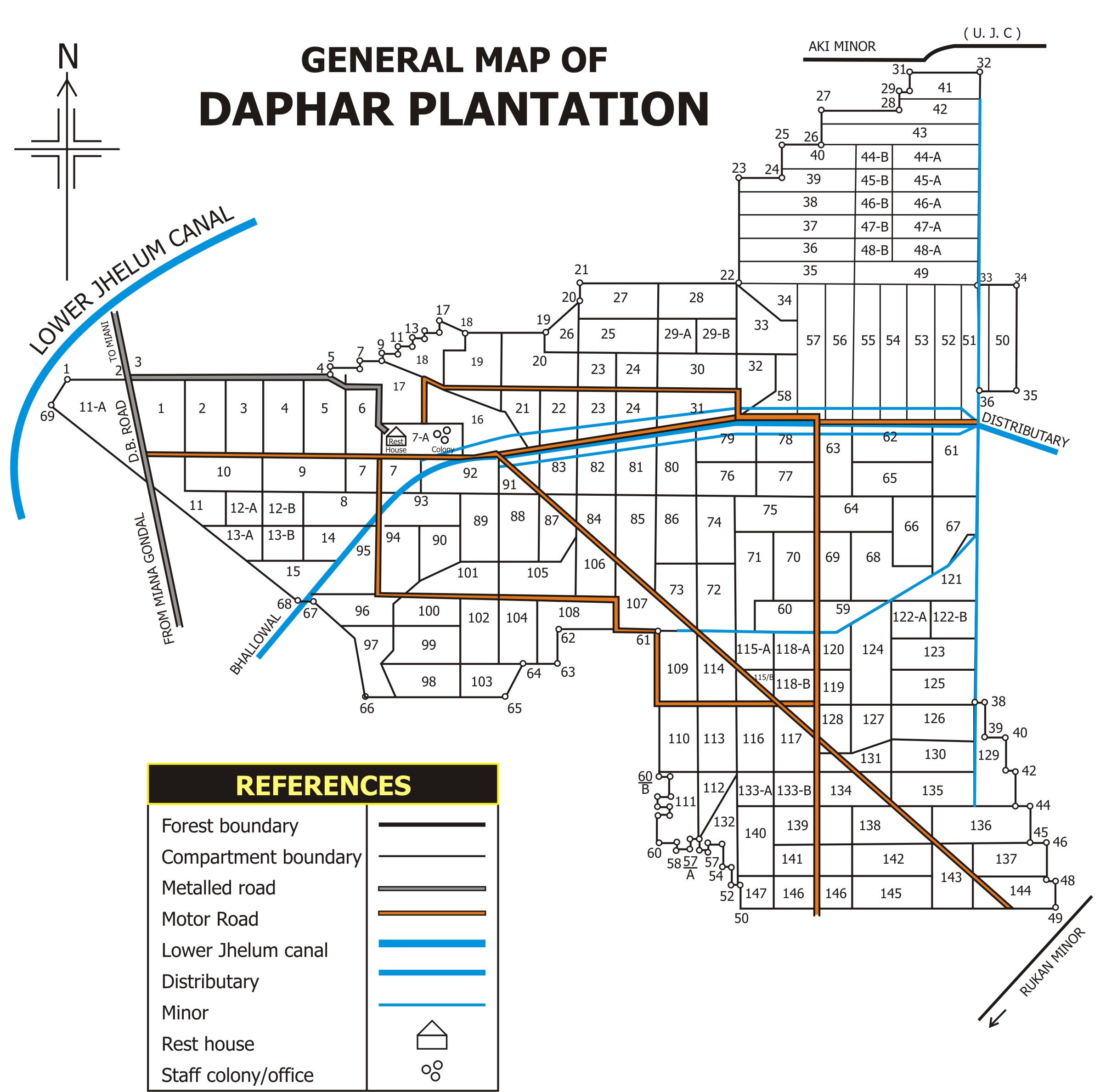