Changa Manga Irrigated Plantation covering an area of 12510 acres (5065 ha) is situated in Kasur district, 74 Km south-west of Lahore. It is located between latitude 31o 1’ to 31o 7’ north longitude 73o 56’ to 74o 4’ east latitude. It is bounded by Karachi – Lahore railway line from kilometer 1140 to 1148 on the north, agricultural lands of village Gandian on the east, proprietary areas of village Moujoki on the south and cultivations of Wan Khara on the west. Jambar –Chunian metalled road linking Chunian with Lahore – Karachi national highway passes through the north – west corner of the plantation for 6.4 kms. Main Branch Lower of the Central Bari Doab Canal system runs through the plantation for about 10 kms from Rd 434 to 466 and divides the plantation into two distinct parts. 113 cusecs sanctioned water is made available through the canal system. The configuration of the ground is more or less flat with a general slope from north – east to south – west. The parent material of the plantation consists of loose eroded soil with an admixture of calcareous sediments. The soil is typical of the vast alluvial plains of Indus bar uplands. It is characterized by dark brown colour, silty clay loam texture, high porosity and low permeability. It is fairly deep, well drained and rich in plant nutrients. The pH of the profile varies from 7.6 to 8.1.The plantation falls in the semi-arid, sub-tropical continental zone of central Punjab and is characterized by high temperature, low relative humidity, erratic and irregular rainfall. The summers from April to September are extremely hot while the winters from mid November to end of January are sufficiently cold. The monsoons generally break during July and August when heavy showers of rain are received. Before conversion into an irrigated plantation, the area under Changa Manga reserve was ecologically a typical dry zone “Rakh”. Natural vegetation of tropical thorn forest comprising of scattered growth of jand (Prosopis cineraria), wan (Salvadora oleoides), karir (Capparis aphylla), rehru (Acacia leucophloea) and other xerophytic species characteristic of this forest type covered the land. Presently Shisham and Eucalyptus are the principal species growing over a major portion of the plantation area. Other species growing are Mulberry, hybrid-poplar, semal, bakain and kiker.Bamboo are also grown on experimental basis. Every years about 500 acres are being afforestated/regenerated. 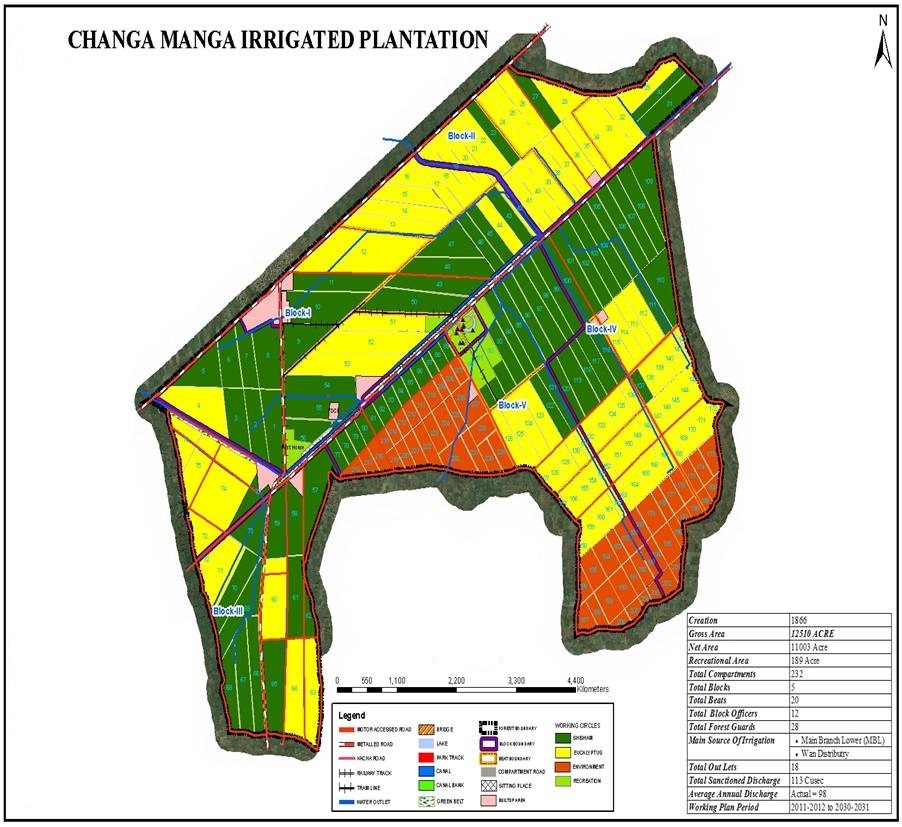